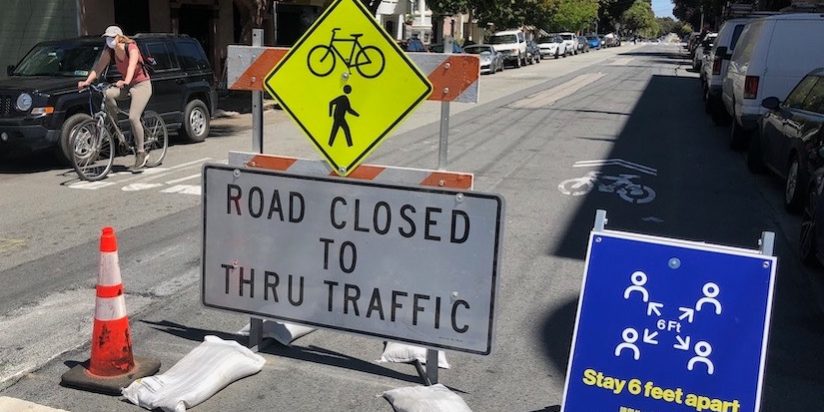 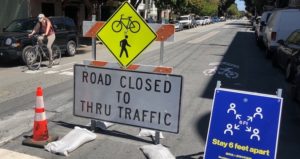 NJBWC ALONG WITH THE BICYCLE COALITION OF GREATER PHILADELPHIA ARE ASKING GOVERNOR MURPHY TO ISSUE AN EXECUTIVE ORDER TO ALLOW SLOW STREETS.

JOIN US BY ADDING YOUR NAME OR ORGANIZATION TO THE LETTER:

HERE IS THE LINK TO THE LETTER

Cities across the country and across the globe have taken actions to provide open space so that people can safely social distance. As of this writing, the Pedestrian and Bicycle Information Center, maintained by the University of North Carolina and funded by USDOT/Federal Highway Administration, reported that 392 cities across the world have made some type of change to their roadways to expand public space in the interest of social distancing. Of those, 179 are in the United States. From Alexandria, Virginia to Winter Park, Florida, from West Hartford, Connecticut, to Santa Barbara, California, streets have been restricted to local traffic only, or closed completely, so that public space could be created for outdoor dining and retail and safe walking with social distancing.

New Jersey communities like Montclair, New Brunswick, Highland Park, Metuchen, Somerville, Morristown, Jersey City, Hoboken, and Princeton have opened streets in downtowns for outdoor dining, and NJDOT worked with them to open non-state streets. Although Somerville and Morristown were denied permission to include state streets in their downtown dining plans, NJDOT has now granted permission to Somerville to extend outdoor dining to parklets in a pilot program. However as of September 15th any and all permits granted will lapse. 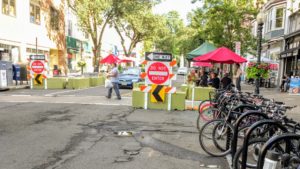 Princeton also engaged the community to limit certain local streets to local and essential services traffic only, called Slow Streets, so people could properly social distance as they walked in their neighborhood. Yet NJDOT drew the line – on Thursday July 2nd, NJDOT notified Princeton that the Slow Streets were considered “full closure” and contrary to policy. Moreover, NJDOT stated that it would place a statewide ban on Slow Streets. This notice was based on an Formal Opinion rendered in 1955 by the then State Attorney General that states that “There is no inherent power vested in a municipality by which it may legally restrict the right of the public to the free use of streets and roads. Any right of the municipality to pass ordinances and resolutions regarding the flow of traffic over its streets and highways can arise only by legislative grant; and there has been none.” 1955!

Princeton Mayor Liz Lempert, who has worked throughout her tenure to bring about economic vitality through livable streets and a livable downtown, pointed out the need for the town to implement these local streets: “Like a lot of other communities right now, people in Princeton are spending more time than ever walking and biking around town. We’re an older town with narrow sidewalks in a lot of places that weren’t designed for heavy foot traffic combined with the need for social distancing. As a municipality, we’re trying our best to ensure residents are safe both from the virus and from cars and trucks. These should be all of our goals.”

The picture below shows one of the proposed Slow Streets in Princeton, a one-way street with on street parking and very little sidewalk space for social distancing. 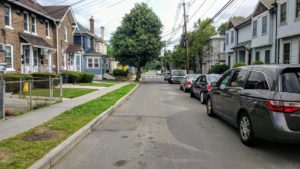 At a time when the country is seeing infection numbers close to or at the same rate as in April, and the public must continue to social distance for the foreseeable future, this is the time when NJDOT should be supporting municipalities and leading these efforts. Instead they are dragging out an antiquated ordinance from the 1950’s to restrict and handicap towns as they struggle to deal with the health and economic devastation they face from COVID, putting more people at risk.

NJDOT is taking a significant step away from their signature Commitment to Communities program, which promised to “stimulate smart development and economic growth” and “adapt to changing conditions and environments”, among other seemingly well intentioned promises to change past practices. The cold COVID response to municipalities’ desire for more safe outdoor space is heavy on policies and procedures from the 1950s, when they were known as the State Highway Department.

It’s natural for an organization under pandemic stress to hunker in the bunker of the past, but New Jersey residents deserve better. When the Department of Transportation was created in the 1960s, they were authorized by law to expand their scope “to solve or assist in the solution of the problems of all modes of transportation”.

Further, NJDOT’s Complete Streets policy of 2009 provides for “safe access for all users by designing and operating a comprehensive, integrated, connected multi-modal network” – recognizing that people walking, running and cycling are the very traffic NJDOT is responsible for. Under a global pandemic, the NJDOT should be placing these policies at the forefront and executing on them, rather than hiding behind an opinion drafted in 1955 that carries with it 1955 highway thinking.

Please join us in asking NJDOT to reconsider their policies and procedures in light of New Jerseyans’ current need for safe outdoor space to social distance, and authorize municipalities to open streets for walking, running and cycling, and limit vehicular access to local residents and essential services. Our health and safety depend on it.

The Bicycle Coalition of Greater Philadelphia